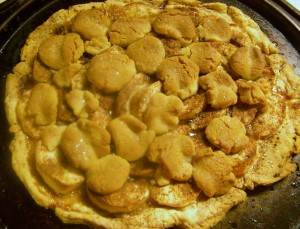 I have made several different kinds of pizzas - ordinary, deep dish, bagel, pocket, and wonton. Last night I was making a deep dish pizza and I was trying to come up with something for dessert. What goes better with pizza, than pizza? I am talking about a dessert pizza. And since it's apple season, an apple pizza would be just perfect. I read a recipe in the The King Arthur Flour Baker's Companion: The All-Purpose Baking Cookbook

for an apple pie pizza. I followed their baking instructions (time and temperatures) but I came up with my own ingredient list. The nice thing about this recipe is that you get the feeling of eating a pizza. You will be able to hold a slice just like you would any other pizza. The crust will be like that of a thin crust pizza.

For the filling
2-3 baking apples (I used Jonathan. Check out my list of baking apples.)
cinnamon
nutmeg
cloves
brown sugar

I didn't measure the exact amounts, since I think those things are up to your personal taste. If you like don't like it too sweet, than only add a little sugar. If you like it spicy, then add a lot of spice. Choice is yours.

Start by preparing your favorite pie crust recipe. If you want to use a pre-made pie crust, fight the urge and make one yourself! Once the crust is ready, roll it into a flat circle. It should be in the neighborhood of 12-13 inches across. Crimp the edges just as you would any pizza. Place onto a lightly oil pizza pan 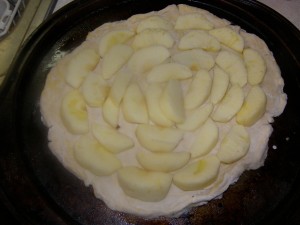 Now to prepare your filling, peel and slice your apples. Place them in a circle, starting in the outer edge, and working your way inward until you have a single layer of apples over the entire crust.

Sprinkle on some brown sugar, cinnamon, nutmeg, and cloves. This is a matter of personal taste, so feel free to add as much or as little of each as you want. Nutmeg and cloves can be pretty strong so don't go too crazy!

Now onto the topping. Take 1 part brown sugar (I used ½ cup) and combine that with your 1 part melted butter (again I used ½ cup). Mix well to combine. Then add 2 parts (I used 1 cup) all-purpose flour. Mix together until a dough forms. Now take little pieces of the dough into your hands and form a ball. Then flatten that ball and place them on your pizza, just as if you were topping a regular pizza. Add as much as you like. I ended up with some leftover dough, which can be cooked up and used like in my Peaches & (Ice) Cream recipe.

If you have some in your pantry, I like to sprinkle on some coarse sugar. This gives the pie a nice shine and adds a little crunch. You can find coarse sugar at any good bulk food store.

Now it's time to bake. For the baking instructions I am following along with the The King Arthur Flour Baker's Companion: The All-Purpose Baking Cookbook

recipe for apple pie pizza. So start your oven at 425 degrees. When ready place your pizza onto the lowest rack in your oven and bake for 15 minutes. Then reduce the temperature to 375 and bake for about another 30 minutes. When it gets close to 30 minutes, check to see if the pie is browning. If both the crust and the topping look nice and brown and the apples have soften, then pull your pie from the oven.