A leaner version of pot roast can be created by using bison instead of beef. Make this in your slow cooker, Instant Pot, or oven for an extra special pot roast experience.

"Oh give me, a home where the buffalo roam."

Wait, I would have to move to a different country for that.

We don't have have buffalo in the United States. We have bison. I learned this as a kid from a park ranger at Yellowstone National Park.

Bison and buffalo are completely different animals. Buffalo or water buffalo look more like a cow. It makes sense as bison meat has a lot of similarities to cow.

The cuts you get from both animals are the same. You get a chuck roast from a cow, you can get one from a bison.

What is a Bison Chuck Roast?

The chuck roast comes from the front part of the animal, near the head and neck. Just like cows, this muscle gets a lot of work, so it will be tough if you don't cook it low and slow.

These types of roasts whether cow or bison (or if you have to call them buffalo) are perfect to make a finger licking good pot roast.

I wanted to give a quick little shutout to Nebraska Bison who so kindly provided a Bison Chuck Roast for me to use in this post. I highly recommend you check Nebraska Bison out and see all the different cuts they offer.

What's the Difference Between a Bison and Beef Pot Roast?

The biggest difference between making a pot roast with beef and making one with bison, is that the bison meat is a lot leaner. You won't see much marbling or fat.

I actually like this. Since I am going to cook the meat at a low temperature for a long time, I not all the concerned with it being too dry. The fat isn't necessarily to make this a delicious roast, that is just as good, no, in fact better than beef.

If I eat really fatty meat, I have a tendency to get heartburn from it. Bison I never have that issue.

Since I don't eat the really fatty pieces of a beef chuck roast anyway, not having them with the bison means I end up with 100% usable meat.

Before we dive into my bison chuck roast recipe, here are some pot roast rules I set for myself

Browning the meat before cooking equals flavor. Only skip this step if you don't like your food with too much flavor!

I know most people want to throw their potatoes, carrots or other vegetables in the pot roast as it cooks. Might be less steps that way, but you are doing no favors to the veggies. They will be overcooked and bland.

I always opt to cook my veggies separate (do the same with my bean soup too) and then add them to the roast. If you want the flavor more incorporated, you could always take the liquid from the meat when it's done and use it to perfectly cook your veggies in.

As you see from the picture at the top of this post, when I made this pot roast I served it over polenta/grits. I love the contrasting flavor and texture the polenta provides eating with the pot roast.

Here is how I made my bison pot roast.

Start out by sprinkling kosher salt on both side of the roast.

Put a pan (preferably cast iron) with some oil over medium high heat. Place the roast on. Brown on one side, then flip.

Add spices to 3 cups of broth. I used homemade mushroom broth (see instructions after the recipe). You also could use beef broth or stock. Pick a low sodium option so you can control the amount of salt better to your liking.

Taste your broth before adding to the meat. It should be strongly flavored. If needed, keep adding more seasoning until it is. This is very important to the final flavor of your roast.

Can You Make Gravy with the Liquid?

Absolutely you could. I don't always do that, but you sure can with the flavorful liquid you created. Here is an idea of how I like to make gravy.

Can You Cook a Bison Roast in the Instant Pot or Oven?

Looking for another cooking method?

How Long to Cook in the Instant Pot?

If you wish to use your Instant Pot, here is what I recommend - I have not tested it yet myself, so you may need to fine tune. For a pot roast the average times range from 60-90 minutes.

How Long to Cook in the Oven?

To cook in the oven, set your oven to the lowest temperature and place the roast inside a cast iron Dutch oven with a lid if you have it. If not inside another oven safe vessel covered in foil. I would cook it for 4-6 hours or until it's falling apart.

What Else Can You Add to the Pot Roast?

I believe pot roast is a great time for clearing your fridge out of veggies that might be pass their prime. If you got floppy carrots or celery, break them in half and toss them in to add more flavor.

Or if you got an onion going soft or with a bad spot, use what's good of it and toss it in the slow cooker too. Same goes for leeks, garlic, or shallots.

Whatever you have on hand that could add some flavor toss in the slow cooker, it's a lot better option than just tossing it in the trash.

How to Cook a Bottom Round Roast 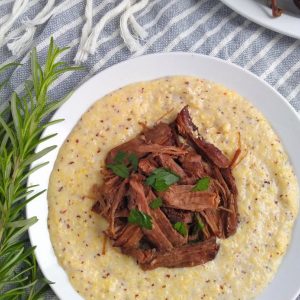 How to Make Your Own Mushroom Broth

If you want to make this pot roast really special, you can make your own mushroom broth for it. It's the way to add some umami flavor.

It's super easy to make.

Roast 8 ounces of Cremini/baby bella mushroom in a 400 degree oven for 15-20 minutes or until browned.

Put the mushrooms into a pot over high heat and add 3 ¼ cups of water. Once it reaches a boil, put a lid on, and turn down to low. Let simmer for 30 minutes.

Strain before using for your pot roast.

« Pumpkin Snickerdoodles
When is Spaghetti Squash in Season? »