Homemade Mini Donuts made with fresh pureed pumpkin are easy to make. Experience them fresh out of the oven. The perfect fall treat!

Apple cider and cake donuts are a fall stable here in the Midwest.

Every fall people rush out to apple orchards to get their yearly fix.

In 2012, we had a massive crop failure here in Michigan and the apples were not available. It was so depressing.

That year I decided to make my very own donuts and have been turning out mini pumpkin donuts every year since. Let's show you how.

I choose a recipe from a blogger from the King Author Flour Company. I am a fan of the company, their products, and their amazing cookbooks which have taught me a lot. I even got to visit their headquarters in September 2021.

The recipe was actually for whole donuts, baked in a special donut pan.

Why make whole donuts when you can make mini donuts? Then you get to eat more donuts, right? And mini donuts cook faster, so you can get to eating faster.

❓ Do You Need a Mini Donut Pan?

While making the donuts in a mini donut pan is really sweet, if you don't have one you can make them in a mini muffin pan, they will just need a little more time to cook and they will be missing the trademark hole. You could call them pumpkin donut holes instead!

You could use a mini donut maker. There are several on the market now. The Dash brand is probably the most well known right now.

The donut pan is going to be the cheaper option. The mini donut maker is going to take up more space in your kitchen, so if you are going to buy one, it should be something that you use at least a few times a month. Or if it's going to be fun for the kids.

So unless you have those reasons or your oven is broken, stick to using a pan.

Here is what you are going to need to make these delicious donuts.

You will also need toppings. We will get to that later on in the post.

💡 Tip - It's better to have the individual spices on hand than just a container of pumpkin pie spice. That way you can pick out the best possible spices. You could make your own custom pumpkin spice blend. This is great if say you really love cinnamon and only sort of like ginger. Or maybe you really live ground cloves or ground allspice and you want to add that to the mix.

What really made this recipe stand out is the use of fresh pumpkin puree. Yes, canned pumpkin is easier, but the fresh stuff is just better and more cost effective.

Pick up a pie pumpkin or two at your local grocery store or farmer's market. They are usually available from mid September through Thanksgiving and sometimes later.

The best part of making your own donuts is getting to eat them warm out of the oven. In doesn't get any better.

While not as good, they still hold up pretty well the next day, more so than a yeast donut would.

The donuts are cake donuts which are so easy to make, you will wonder why you never made them before.

It's a lot easier than frying. No hot oil to have to buy and worry about. No rise time. Don't mistake me for saying that I don't love yeast donuts.

Let me take you through the steps of making homemade mini pumpkin donuts.

Using a hand mixer, beat the eggs in a large mixing bowl. Then add in all of the ingredients except the flour. Mix to combine.

You can do this whole thing using a stand mixer as well.

Now add in the flour. It's important here that you don't overmix the flour. Your not making bread! Your donuts will be tough if you do mix too much.

Just mix slowly, so flour doesn't go everywhere, until just combined. If it's lumpy, don't worry about it, it will work itself out later.

In September 2019, I attended my first blogging conference called Tastemaker. As part of our swag bag we received the Whiskware Batter Mixer.

This thing is perfect for dispensing small amounts of batter, say into a mini donut pan 🙂

Spray the pan with nonstick cooking spray before adding the donut batter. Even if using non stick, you really should oil the pan, or they probably will still stick some.

Fill the mini donut pan or mini muffin pan halfway up with the batter.

💡 Tip - To know when your donuts are done use a toothpick. It should come out clean if done.

Give them a couple minutes to cook before turning the pan upside down over a cooling rack. If you oiled the pan good enough they should come right out.

You could enjoy the donuts as is.

What would be more fun is to add some finishing touches.

I want to try a crunchy cinnamon sugar topping kind of like the one from Panera Bread for their bagels. I will let you know when I figure out how to do that! But in the mean time, I found these delicious maple crunchy sprinkles during a trip to Vermont. They are made of pure maple syrup. Those would be amazing on the donuts. Add them like sprinkles.

🎃 How to Make Pumpkin Buttercream

If you want to give pumpkin buttercream frosting a try, watch the video below (under 60 seconds).

If some how you can end up with leftover donuts, give yourself a pat on the back for your self-control. Then get out an airtight container to store your donuts in. If you have toppings you don't want to stack those donuts. Just put them in a single layer. If it's just cinnamon sugar it's not an issue.

I would try to enjoy the rest by the next day. Share with your neighbors if you need to. You also could try putting them in the freezer. This usually helps keep them longer. I have been to bakeries that sell already baked donuts out of their freezer. 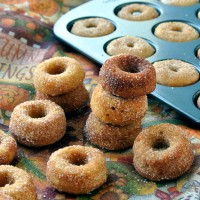 How to Glaze Your Donuts
Tried this recipe?Mention @eatlikenooneelse or tag #eatlikenooneelse
« When is Spaghetti Squash in Season?
Overnight Pumpkin Yeasted Waffles »