Mix fresh pumpkin into your French toast egg mixture for a delicious fall breakfast. Learn how to make it on the electric griddle. Also direction to make French toast sticks.

Every time I went on vacation as a kid, I would always order that for breakfast as long as it was on the menu. I have enjoyed french toast in many a state.

Some of the best french toast I have had has not come while on vacation, but after a hard day of work. I have been spending a lot of time making pumpkin recipes this fall this month so I can re-shoot some of the photos.

I am a better photographer and I have a better camera than in fall pasts. One of the recipes I re-did was for pumpkin yeast rolls and bread. I thought since I have already made the loaf, why not create a new recipe out of it?

I needed something for dinner, and we like doing breakfast for dinner once a week as the kids love it. French toast seemed like the perfect option. I decided to do dress up our normal bread dip with of course - pumpkin!

In order to make the best pumpkin french toast there are some things you need to follow.

1. Stale bread - If the bread is stale it will better absorb the batter. Now I made my bread the same day I made the french toast, so that didn't give me a lot of time for it to stale. So what I did as soon as I could I sliced up my loaf and let it be exposed to area. This helped enough for the bread to absorb the batter. Brioche and Challah make good french toast by the way.

2. Use half and half - A lot of recipes call for using milk in the batter. I say forget that and go all out using half and half. Yes it adds more fat but aren't we making the best french toast here? Don't so as crazy as to go with heavy cream. You don't want the bread to be too heavy.

3. Give the bread sometime - Let the bread have a moment to soak in the batter. Often people just dunk it and take right back out. Give it a minute. Your patience will be rewarded.

4. Use the best spices - It may be tempting to use pumpkin pie spice, but I prefer to use the best spices I can find. Cinnamon, ginger, and nutmeg is what I use for this recipe. Always freshly grated nutmeg as it's far superior in flavor. My recommendation for all your baking spices is Burlap & Barrel.

Whenever I cook french toast or pancakes, we always bust out the Electric Griddle. It's wide surface helps us cook more at once. Yes a frying pan will do but you will spend a lot more time cooking when that time can be spend eating.

Electric griddles aren't very expensive, so I highly recommend picking one up if you don't have one. I am not one to just litter my kitchen with small appliances, but this one is worth.

⚙️ Why This Recipe Works

It's super simple to make. Since you making a batter for soaking the bread that doesn't need to cook or rise before adding the bread, introducing new ingredients like pumpkin is ridiculous easy.

Or you can change up the dairy, which is what I do at Christmas time with my Leftover Egg Nog French Toast. Or you can try using a non-dairy option along with a vegan egg replacement - I haven't tried this but if you do, leave a comment and let me know how it worked.

🌡️ What Temperature on the Griddle?

The key thing with french toast is to make sure your custard is cooked when the outside is perfectly browned. If you set your griddle too high then you will burn the outside before the inside is done. No one wants their french toast to be a mushy mess in the middle.

Each griddle is different. If yours has a temperature setting I would aim for something in the 325-350 degree range. Mine goes up to 400, so this would be a medium-high temperature.

Keep an eye on the french toast as you cook it and adjust the temperature if you think it's browning too fast.

🍁 Serving Suggestion - Seek out Bourbon Barrel Aged Maple Syrup for your French toast. It's maple syrup that has been aged in used Bourbon barrels, giving the syrup more depth of flavor.

🍞 What Bread to Use

You really can use any type of bread - white bread or wheat bread work. However here are some options that I think are the best bread for french toast.

I typically don't like using French bread or any bread with a harder crust. I love breads with more of a soft crust.

For the ultimate pumpkin flavor you can try making it with Trader Joe's Pumpkin Brioche bread. Pick it up while you check on these other pumpkin favorites at Trader Joe's.

🔪 How to Make French Toast Sticks

Want to make your french toast into sticks? It's super easy to do.

Slice the bread into thirds before you add it to the batter and proceed as you normally would.

Aim to get the sticks the same size so they cook at the same rate until they are golden brown.

Why would you want to do sticks instead?

I think those are pretty good reasons to try this recipe as sticks.

Real maple syrup is always welcomed. You could also slices up some apple thinly to top your French toast. Or a simple dusting of powdered sugar or cinnamon sugar.

You know what else would be good - caramel sauce. Be more of a dessert than a breakfast, but certainly would be delicious.

🍁 Maple Syrup - Seek out Bourbon Barrel Aged Maple Syrup for your French toast. It's maple syrup that has been aged in used Bourbon barrels, giving the syrup more depth of flavor.

Here are some other pumpkin recipes you will want to check out:

Here are some more things you can cook on your electric griddle: 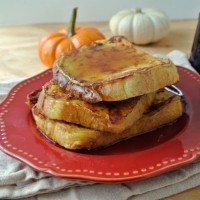 To make French Toast sticks, simply cut the bread slices into even thirds and proceed as you normally would.
Tried this recipe?Mention @eatlikenooneelse or tag #eatlikenooneelse
« Baked Delicata Squash with Brown Sugar & Spicy Butter
How to Make Pumpkin Buttercream »