Save time on cooking bacon by using an electric griddle. Each to use, easy to clean, and easy to flip. It's much more fun to cook bacon on a griddle than in a pan!

An electric griddle is all about real estate.

That real estate comes in a large cooking surface. Perfect for cooking more food at once.

⚙️ Why It Works

Let me give you my top reasons for cooking bacon on an electric griddle.

Since you are cooking on a flat surface with minimum edges, it's easy to quickly flip the bacon over with a good pair of tongs. I recommend tongs with silicone edges so that you aren't scratching the non-stick surface of the griddle.

When you got a family to feed, you want to be able to cook as much as you can at once. Even my largest frying pan I can only fit 4-5 strips at a time.

I have before fit an entire 12 oz package of center cut bacon on a griddle.

Bacon fat is liquid gold in my mind.

Electric griddle have a hole at the bottom to drain the fat. Then when you are done you pull out the tray (once cool enough of course) and pour the fat into a container to save for later. Easy peasy.

Two things to keep in mind when cooking bacon on the electric griddle - start cold and go up to 325 degrees.

You don't need to heat up the griddle before adding the bacon. By placing the bacon on a cold skillet to start you will allow the fat to slowly start to render. The bacon won't stick and will cook more evenly.

You don't want to griddle too hot either. You want it to cook evenly without burning on one side. Go slow and let the bacon do it's thing.

Doing More than One Batch

If you do multiple batches of bacon, I would recommend using a tool that won't scratch the surface and move some of the bacon fat into the draining hole so that you don't want an excess amount of fat.

🥓 RELATED - How to Cook Bacon in the Instant Pot

✂️ Should I Cut in Half?

I really like bringing a plate full of whole strips to the breakfast table, so I usually don't cut it in half. 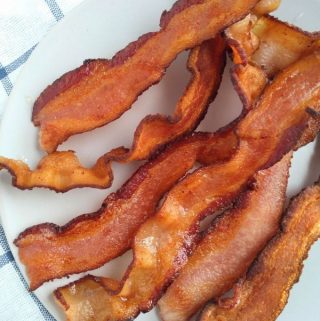 If cooking a second batch on the same griddle, make sure to remove excess fat and momentarily turn the temperature down to low. Wait a couple minutes before adding the next bacon. Then turn the heat back up.
Tried this recipe?Mention @eatlikenooneelse or tag #eatlikenooneelse
« Alton Brown's Orange Sherbet
When is the Best Season to Buy Strawberries? »