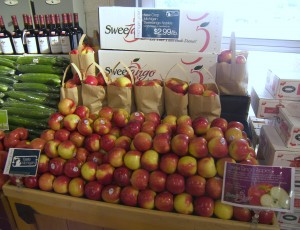 Last year I had my first SweeTango apples. I had them from 2 different sources. The first was grown by Stemilt growers in Washington and the second was Fowler Farms in New York. But this year my SweeTango apples came from my own home state of Michigan. They were a bit different from the ones I had last year. First, was that they were a lot smaller in size than the huge ones I had last season. Second, these ones had more yellow in their color than the ones from last year. Flavor wise there were just as good as last year. They had that nice spicy flavor you expect from a SweeTango.

I found these apples at Plum Market in Ann Arbor, Michigan. They were grown by Applewood Orchards located in Deerfield, Michigan. I also found Michigan grown SweeTango at Joe's Produce in Livonia.