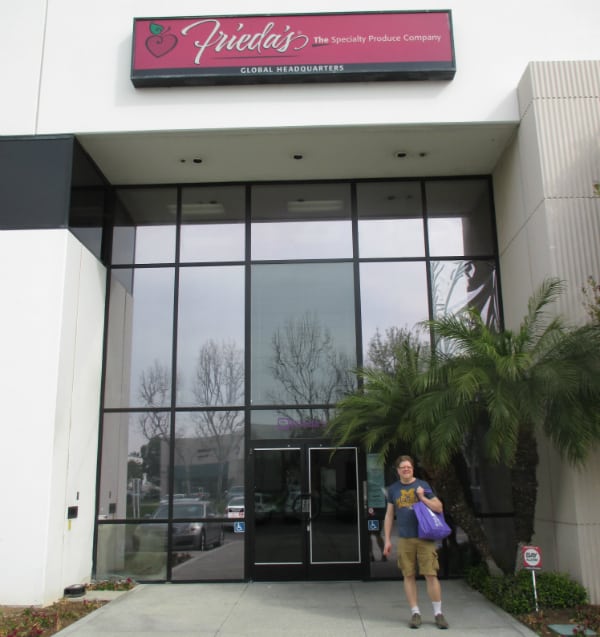 Food blogging definitely comes with it's privileges. One of them is my working relationship with Frieda's Speciality Produce. Each month they ship me a few items to taste and trying out for the blog. Those items have included purple snow peas, Green Dragon apples, Organic Finger Limes, and Angelcot apricots (in that case they send me coupons to buy them in the store). Sweet deal huh? Frieda's is headquartered in Los Alamitos, California, not far from my wife's family. When I told them I was coming out, they invited me to come to HQ and have a tour of their facility. 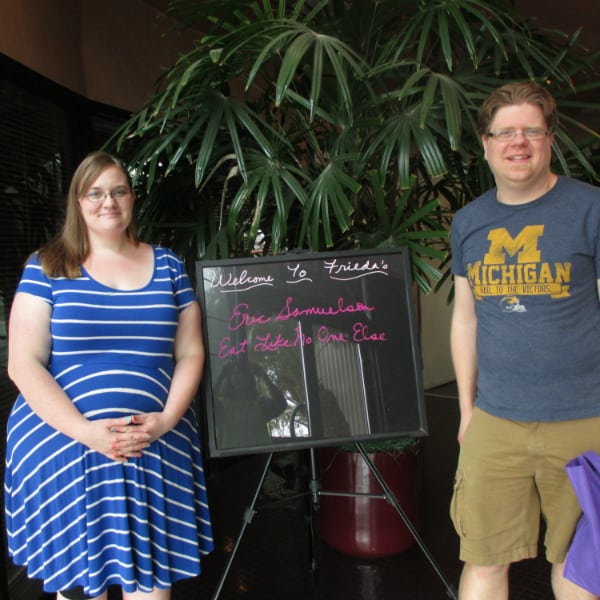 My relationship with Frieda's began about 2 years back. I had come upon their Stokes Purple Sweet Potato and featured it on the blog. I contacted them with a question. From there our relationship began - communicating on a monthly basis - talking about everything from Hatch Chile Peppers to Organic Heirloom apples. Oakley Boren has been my main connection in the company and the one who I would meet for breakfast before touring the Frieda's offices and warehouse. 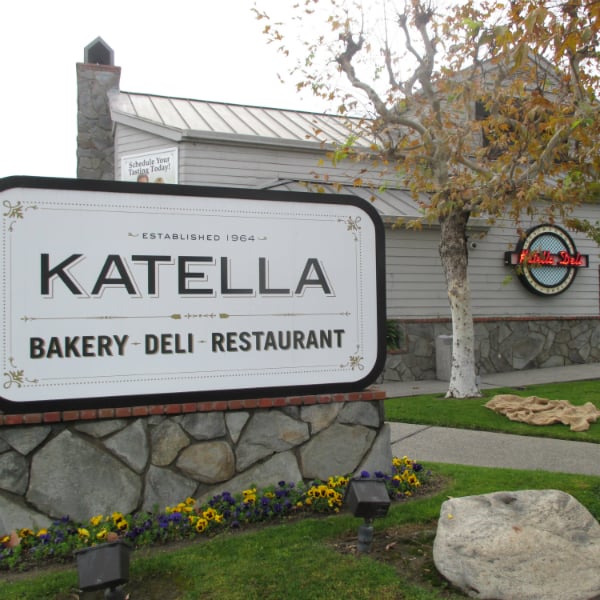 My wife and I braved the Orange County morning traffic to met Oakley at the Katella Deli/Bakery. As you walk in you see amazing decorated cakes, some that seemed to defy the laws of gravity. There were two main areas, one was the restaurant and the other a deli/bakery with very appealing meats and treats. For breakfast I had the Blueberries & Cream waffle. A perfectly cooked waffle with large, tasty blueberries, and a fresh made whipped cream. I couldn't believe how good and how filling it was. I wouldn't have had room for bacon or sausage even if I ordered it. 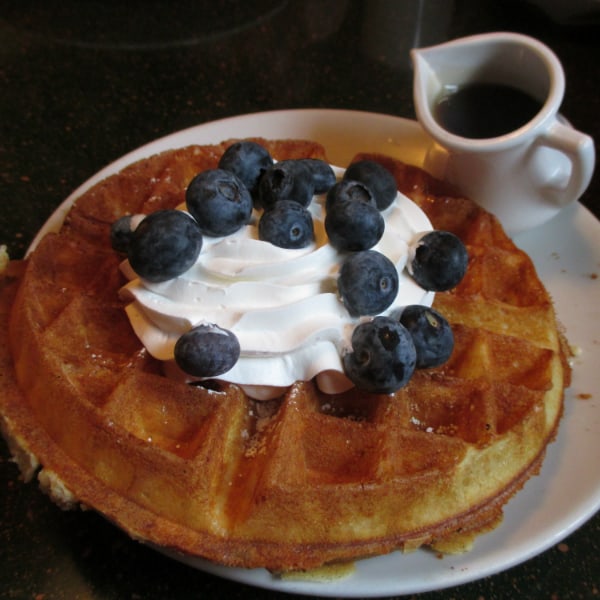 From there we made the short drive over to Frieda's. Oakley was a wonderful tour guide, she didn't miss a thing. She had a sign with my name and blog name on it as we walked in the door. Made me feel like a celebrity. She showed the many pictures that donned the hallways, including their wall of produce that they have introduced to the United States. One of the biggest is the Kiwi. A fruit found in every produce department was not heard of until the 1960s, when Frieda was compelled to bring the fruit. See if you can spot and name some of the fruits and vegetables in the pictures below. These are all brought in by Frieda's. 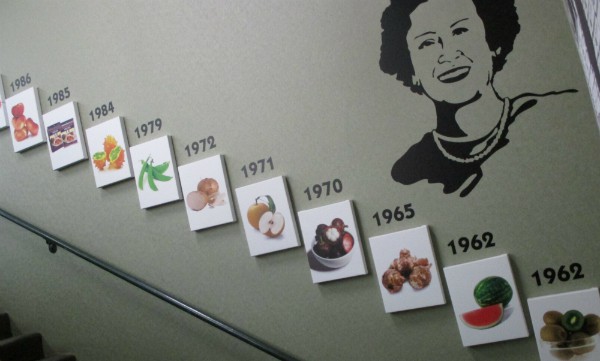 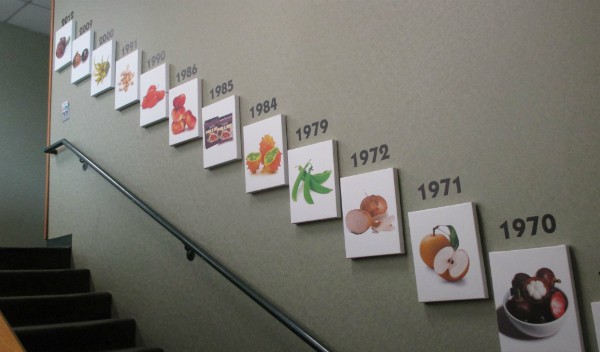 We got a tour of all their offices, meeting rooms, test kitchen, etc. The best part of the tour was the people we met. She introduced us to many people including Frieda's CEO Karen Caplan. The founder Frieda was out of the office attending a film festival premiere about herself called "Fear No Fruit". We got a few minutes to chat with Karen, talking about why I blog and the grocery stores in my area. Being a grocery nerd, it was fun looking around the office, seeing the various boards with different grocery store names on them. Everyone we met was friendly. The atmosphere was family-like more than just a bunch of co-workers.

One of the special things I heard on the tour was from the head of the warehouse. He talked about how we wanted to connect more with those in the offices. Start by just saying hi. There was a disconnect and he wanted to fix that, which I really admire. Businesses where you have two distinct areas of work like a produce department in a grocery store, you got your floor workers and the people in back cutting up fruit. They are on the same team but aren't always in sync with each other. Hearing this guy's statement put a smile on my face and showed what kind of dedicated people work for Frieda's. 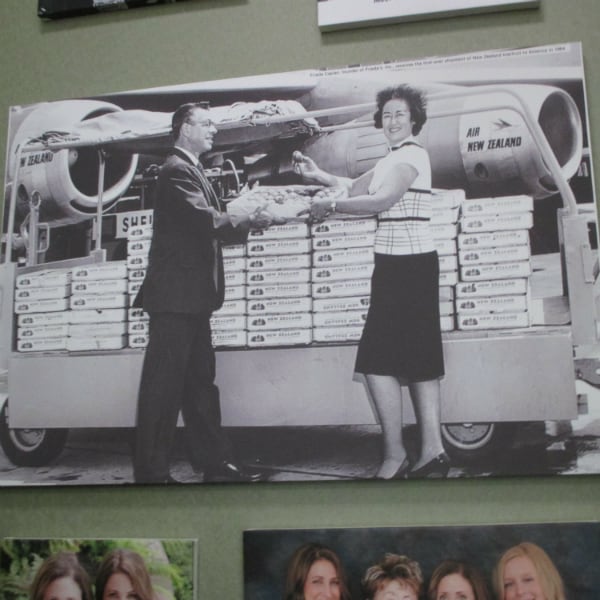 Speaking of the warehouse, we got a chance to tour it as well. It was stock with produce as far as they eye can see. Box after box of stuff that would eventually make it's way in stores all across the country. It's pretty cool when you think about it. A lot of the stuff I didn't realized went through Frieda's since they don't label everything that is distributed by them. At the time of our visit they were remodeling their cold storage to be more energy efficient. When you have gigantic rooms with huge fans blowing, your energy usage is going to be sky high, so they are working to reduce costs as well as doing what's best to keep the product fresh.

One of the things I learned that I did not know is that Frieda's has a space dedicated to drying out ginger. When ginger arrives it's wet. Americans don't want wet ginger. So they dry it out before shipping it off. In other parts of the world people expect it wet. Once again us silly Americans are causing an unnecessary step to be done because of our false perceptions. If you ever do see ginger in the store that is wet or damp, and I do on occasion, buy it without fear, it's perfectly fine.

Big thanks to Oakley for taking the time to organize a great tour for us. It was fun taking a peak behind the curtain. I am even more excited to continue to work with this great company, tasting and promoting their fabulous products and to see what they have next for the American consumer.