Home » At the Store » Fruit & Vegetables » When Does Peach Season Begin (and End)? 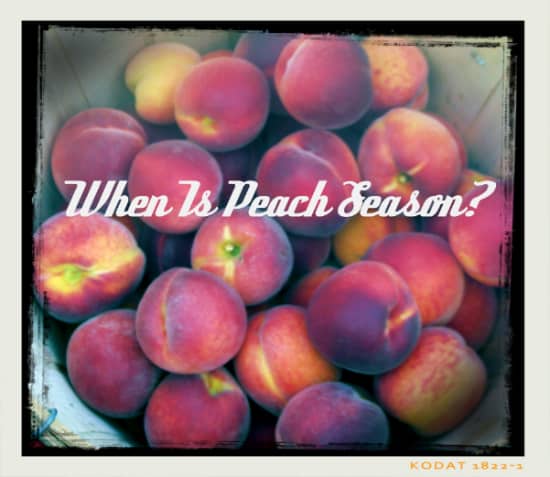 Is It Peach Season Yet?

Every year when the temperatures start to rise, so does the number of people visiting this popular page on my blog. People want to know when peach season is beginning. They want to know when they can begin looking forward to chin-dripping sweetness. Even thought you can basically buy peaches pretty much year round give or take a couple weeks, there is that perfect moment when they are at their peak. So my goal is to share with you when in your favorite state you can find that exact moment in time. I currently have information on the following states: Florida, California, Georgia, Michigan, South Carolina, New Jersey, and Idaho. Check out the table below for harvest times with more detail about each state to follow.

When Does Florida Peach Season Begin?
When we think Florida we think citrus, not peaches. But Florida does fill in a gap between the end of Chilean peaches and the start of the big American peach growers. Because of it's warm climate and Florida can only grow peach varieties that need only a short number of chill hours (amount of time a peach tree needs of cold weather to produce fruit). Florida peach season is also very short, only going from about mid April to the end of May. Florida peaches are making a comeback. According to the Packer, in the 1980s, severe freezes froze production. 10 times more land is dedicated to peaches in the last 7 years.

When Does Georgia Peach Season Begin?
Georgia is known as the Peach state. They produce some of the country's fine specimens. They battle with California each year to be the first to market. Georgia peaches can arrive as early as the beginning of May in a good year. In 2013, the crop was a bit late but an overall good crop is expected. Check out this video from Lane Orchards:

By harvesting different varieties that are available at different times throughout the season, Georgia peaches usually last until the beginning of August. So the Georgia peach season is around 3 months or so, give a take a few days. 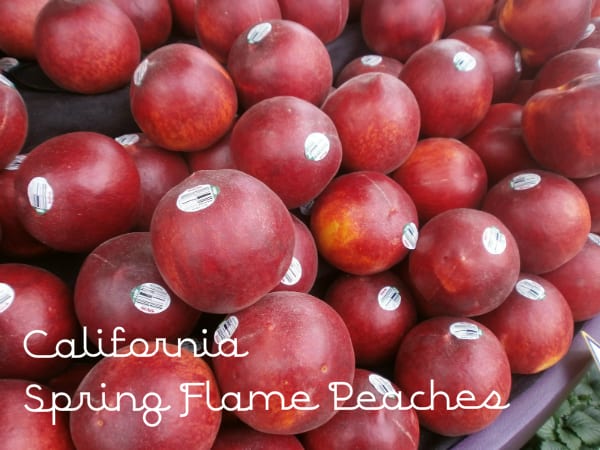 When Does California Peach Season Begin?
The California peach season lasts about a month longer than the Georgia season. They are still harvesting late varieties on Labor Day weekend. California also leads the way when it comes to growing the most peaches. Depending on where you live in the country, most of your peaches in the stores are probably going to be California. With that said there are a lot of low quality California peaches on the market - often picked too early or varieties that aren't very flavorful. The varieties in California that show up in stores tend to be very round shaped with a vivid red color, almost all red, and very little fuzz (see picture above). Not all hope is lost. If you can find Spring Flame peaches out of Cali, then you are in for a treat as they are one of the most well balanced peaches I have had.

One of my favorite peach growers is Masumoto Family Farm. They were the subject of a post I wrote about big vs small fruit in the grocery store. They also have an awesome book with amazing recipes called "The Perfect Peach" If you are peach lover I highly recommend checking it out.

Here is a video about the 2013 California peach crop:

When Does South Carolina Peach Season Begin?
Georgia may be getting all the allocates as being the peach state of the south, but do not overlook South Carolina. They actually out produce and out ship Georgia. Their peaches come just around the same time as Georgia. The first South Carolina peach I had this year were Flavor Rich peaches. They were harvested at the start of May. Most of the grocery stores I have seen market both Georgia and South Carolina peaches as Southern Peaches, so it can be a challenge to determine which state your getting them from. 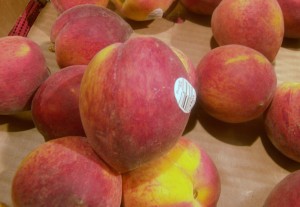 A lot of the Southern Peach varieties come to a point at the end like in the picture to your right. Often they are also very fuzzy, like they could use a good shave. The colors tend to be more yellow and orange, than the dominant red you find in most commercial California peaches.

When Does New Jersey Peach Season Begin?
Often New Jersey is the butt of all New Yorkers joke but don't under rate this state - these know how to grow peaches! They find themselves behind the southern state of Georgia and South Carolina, but before the midwest peach giant of Michigan. Their tree bloom around the middle of April with the first harvest taking place in July. Their are u-pick peach farms like Melick's Town Farm in Califon, NJ. They have over 5,000 peach tree featuring over 30 varieties of yellow and white flesh peaches.

2013 New Jersey Peach Crop Update
Farmers are feeling optimistic. The cooler spring temperatures are keeping the tree from blooming too early. The earlier the tree bloom the greater risk for a destructive frost which took place across New Jersey and the midwest in 2012.

When Does Michigan Peach Season Begin? 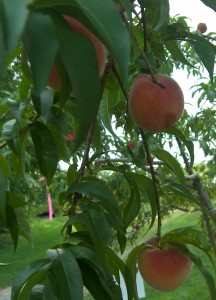 Over half the states in the US harvest a significant amount of peaches. My home state of Michigan is one of them. Our peach season begins in mid to late July. Red Haven peaches are the most popular variety grown in Michigan. In fact, you will find that most Michigan peach varieties are listed by the number of days they are ripe before and after Red Haven. The latest varieties grown in Michigan are ripe right at the end of September.

When Does Idaho Peach Season Begin?
Usually people only associate Idaho with potatoes, but they have been developing a strong presence in the peach market in recent years. Their advantage is that they are late in the season, when other states like California can only offer peaches that were stores and picked weeks ago, Idaho is able to offer a fresh, delicious bounty. The Idaho peaches I had in 2012 where among the best tasting of the entire year! Kudos to the potato state!

From Clingstone to Freestone
One another to know about peach season is that the first peaches of the season are clingstone peaches. This means the flesh sticks to stone or the pit inside the peach. Try as you might, you will never get it all off. As the season progress the peaches become less clingy. Usually by the middle of the season, all peaches are freestone - you can easily remove the pit from the peach without taking any flesh with it.

For more information about peaches, check out my tips on how to find great peaches. In case it's not peach season or you are just looking for a take anywhere snack, try purchasing some dried peaches

. Good dried food can be very flavorful and can fill up your stomach fast.

If you are white peach fan be sure to check out my new post that particulary talks of the white peach season.

If you are into eating the best each season has to offer before you leave the site today, check out my e-book series [Eat Like No One Else] This... to find all the best information on what's best each season, in an easy to read and very affordable package.

Other When in Season? Posts
Nectarines
Cherry
Plum
Apple
Orange/Mandarins

« Real Time Farms : A Source for the Source of Your Food
Watermelons Exploding in China - Importance of Knowing Your Food Source »