Home » At the Store » FAQ » What is Uncured Ham? | Are HoneyBaked Hams Uncured? 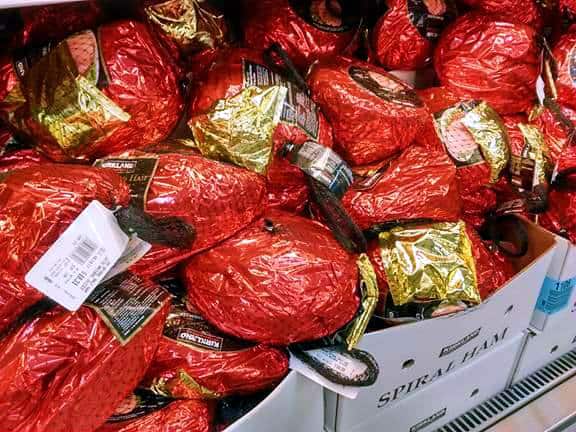 Another latest buzzword in the food world like superfood, cage-free, grass-fed, etc.

You see it showing up more and more on packages of meat. Even Ball Park now has uncured hot dogs. That is another post. Today we are going to look at what uncured means for a ham.

What is an Uncured Ham?

Hams that are labeled "uncured" have not had any sodium nitrates or nitrites added to it, this includes the spiral cut uncured hams.

There may be some naturally occurring nitrates or nitrites but none are purposely added to as a preservative. There is research out there that indicates that excessive nitrates and nitrites can lead to cancer.

Whether that true or not I always think it's best to avoid added chemicals that normally would not be there. More and more places are carrying uncured products.

Whole Foods Market carries Wellshire Farms products. They have several different types of ham, all that are uncured. Whole Foods also carries Applegate products which are organic and uncured.

Trader Joe's is also getting in on the uncured act with their spiral half and quarter hams. In more tradition chain stores, you can find Hormel Nature Choice Deli Hams. They also contain no added nitrates and nitrites.

To learn more about other ingredients besides sodium nitrate commonly found in hams, check out my post "What's In Ham?"

Is Eating an Uncured Ham Safe?

Some people are wondering if the ham is uncured is it still safe to eat. I think people see the words "uncured" and think it's similar to something being unpasteurized.

Sodium nitrates help to preserve the color, making the meat look more appealing to the consumer (see this report on the Organic Consumers Association website).

I have had many people coming to the site looking to find if the ham you buy from the HoneyBaked Ham Company contains nitrates. The answer is YES.

So their hams are not uncured and if that is something that you want, you will need to stir clear of theirs.

How to Cook an Uncured Ham

An uncured ham can be cooked the same way as one that has nitrates added. Almost all of them you will find will be already cooked, so it's a matter of reheating.

I prefer a slow reheating process at a low temperature like 250 degrees and then once it reaches an internal temperature of 135 degrees add a glaze and turn the oven up to 400 to solidify the crust.

What about a Fresh Ham? Aren't They Uncured

True, a fresh ham is also uncured. Typically what you see labeled as uncured in the store is a cooked ham not containing added nitrates like previously mentioned.

If you are looking to cook a ham labeled "fresh ham" than you can soak it in a brine ahead of time, add a rub when you place it the oven, and a glaze at the end of cooking, like in this recipe found at Food Network's site.

Where to Find an Uncured Ham?

Two sources I know for uncured hams are Whole Foods Market and to my surprise Aldi. I recently had someone comment on another post on my blog informing of this. I will have to check it out for myself.

« Difference Between Types of Ground Beef
Who Makes The Best Grape Soda Pop? »