Practice your butchering skills and make this quick to cook turkey with an outstanding cranberry-orange glaze - made with juice concentrate and orange marmalade.

This past Thanksgiving, I picked up 3 turkeys over 3 trips to the grocery store.

How can you pass up paying under 60 cents a pound for meat?

For the first two turkeys I used Alton Brown's Dry Brined Turkey, which was purely amazing each time.

I wanted to try something different for the 3rd one as well as review another chef's recipe.

Just after the New Year I pulled out of my turkeys out of it's cold winters nap and broke out Giada's recipe for a Cranberry-Orange Glazed Turkey.

The daunting task of this turkey was having to break down into pieces as the recipe calls for. But the fun part is getting to make a tasty, tangy glaze with cranberry and orange juice.

Below you will my notes from this recipe. You will find the recipe at the bottom, written in my own words.

The recipe calls for an 11-pound bird. Mine was a little bit over 12. Anything in that ball park of 11 is good.

Much easier to work with a smaller turkey. I wouldn't want to try to cut up a 22 pounder!

For the job you are going to need a good pair of kitchen shears or a sharp knife.

Cutting this thing was a challenge. I followed a YouTube video as I have never done it before.

As you can see from above I had a little trouble keeping all the skin attached to the breast meat.

In the end, I got all the pieces I wanted even if they weren't perfect looking.

Unless your writing for a food blog, don't worry about being perfect. This kind of thing takes practice. Or you could do what Giada did and have your butcher do the work for you. If you have access to such a butcher!

Why This Recipe Works

Cutting up the turkey is all about helping the turkey get done faster. The faster you can get it done, the less likely you are to dry it out. Cook the turkey for just 1 hour 10 minutes before adding the glaze.

Applying a glaze to the turkey and then quickly returning to the oven will help the glaze adverse to the bird. Also check the temperature of the meat with an instant read rheometer to see if it it has met your thermal goal.

Here is what is called for in the glaze -

I applied the glaze with my favorite OXO silicone pastry brush and just put it back in for 5 minutes to solidify the glaze, brushing on some additional glaze when it came out.

I decided to make a double batch of the glaze. With more than enough ingredients I thought why not?

I wanted to be sure I had enough glaze to add to the gravy without worrying about having to go light on the turkey. I still had some leftover in the end, good for freezing for another day.

The leftover orange and cranberry concentrate was used make a cran-orange juice.

How to Make the Gravy

To make the gravy, you use the pan juices. The challenge is that there is a lot of fat to deal with. If you own a fat separator, you can just pour the juices into that.

If you don't own a fat separator try this

To finish the gravy, I took 1 cup of homemade giblet stock from my last turkey that I had froze. I melted it in a large non-stick frying pan.

Mixed in the pan juices, brought it all to a boil.

Then I added 3 tablespoons of the glaze. Allowed it to reduce for about 4 minutes. Added 1 tablespoon of butter for that creamy mouth feel.

Thoughts on this Recipe

The flavor of the turkey was outstanding. Not too sweet and not too tart.

The gravy was unlike anything I ever had. It had that great turkey flavor from the pan juices and stock, but it also the addition of the cranberry-orange glaze brought it to a whole another dimension.

The turkey itself wasn't as juicy as the brined ones I have made. It wasn't dry by any means thought and the unique gravy helps to compensate.

My family enjoyed experiencing a turkey with a different flavor.

The glaze itself I would use again. I think it would be good for just a turkey breast.

Or you could increase the amount, add a ton of kosher salt to it, and make a brine instead. I have not tried it out myself yet, but I know it would be yummy. 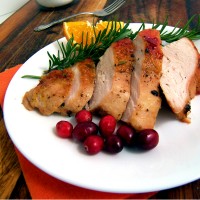 To make the gravy

If the glaze becomes too thick while you are waiting to use it, just gently reheat it. Or you can keep it on the stove on low, just make sure to whisk it before using.
Tried this recipe?Mention @eatlikenooneelse or tag #eatlikenooneelse
« Rachael vs. Guy: Celebrity Cook-Off - Season 2 Opener Recap
Healthier Non-GMO Alternatives to Corn Flakes Cereal »