How much thought do you put on gravy? It is something you just throw together at the last second without much forethought or worse yet does it come out of a can or jar? Gravy is the sauce that ties the whole meal together from the turkey to the potatoes. I think you need to make it good. A good gravy can help cover up any turkey shortcomings. I am always up for trying out new gravy recipes. I saw that Rachael Ray had a recipe for a Maple-Worcestershire gravy. I thought that sounded interesting, let's give it a go. You can print the recipe off at Food Network's website. Here are my notes from this recipe. 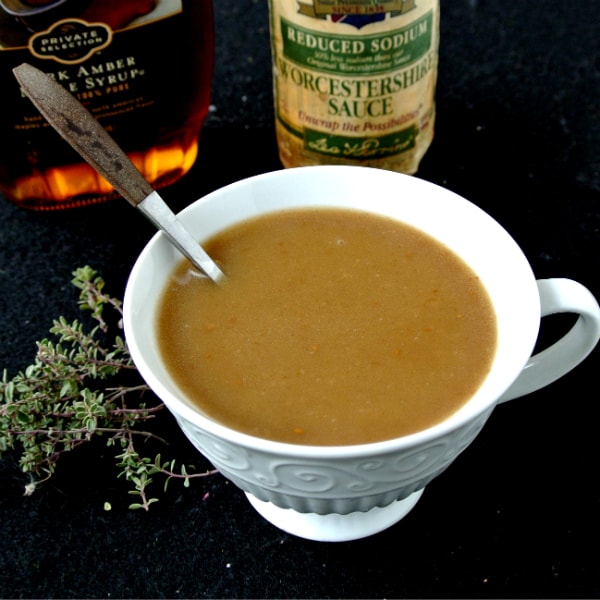 1. This gravy is made with a roux, which is how I like to make my gravy. Easier to thicken when you incorporate the fat and flour before adding any liquid. I also take advice from Alton Brown and replace half the flour with potato starch. By using two different types of flours it helps the gravy from becoming a solid mass shortly after finishing it.

2. To make this gravy really wow, you got to use the best ingredients. I like Lea & Perrins Low Sodium Worcestershire. They have been doing it since 1835, so they know what they are doing. It has the best flavor of any Worcestershire I have had. I also like their low sodium version as it gives me more control over the salt content.

3. For the maple syrup make sure you go dark. A Grade B or Dark Amber syrup would be best. There are a lot of bold flavors in this gravy, so you need a bold syrup to stand up with them.

4. I like to make the gravy in a frying pan. I like the wide open spacing for whisking. And I feel the gravy thickens up so much faster with a wider surface area. Just be careful to keep on eye on it, so you don't burn it.

This was a mighty tasty gravy. It was unlike any gravy I have ever had. That being said, I didn't really like it on the potatoes by themselves. The sweetness wasn't working for me with the mashers. Though I do think it would be great just on turkey itself where the sweetness would enhance the meat. My 5 year old did not want any part of this gravy. I was happy and disappointed at the same time with this recipe.

« How to Make Mashed Potatoes from Baked Potatoes
Pumpkin Cornbread »