What cheddar is to England, Manchego is to Spain. Learn all about this Spanish cheese and how it compares to another popular Spanish cheese, Mahon. Find out which is best for melting. Also get our recipe for Spanish Egg Bites with Manchego.

Is your favorite place in the world, the cheese counter at the grocery store?

I know it's one of my mine.

I love a store that has a good cheese counter. It's where I can go to discover cheeses that go beyond just Cheddar, Colby, or Mozzarella.

A cheese counter is a place where you can travel the world without ever leaving your hometown.

I have never been to Spain before. But I have had Spanish cheese.

Two of my favorites, are the two most common you find in U.S. - Manchego and Mahon.

How do they two cheeses differ? What can you use them for? Let's take a closer look.

Also check out our post What's the Difference Between Cheddar and Colby Cheese?

What is Manchego Cheese?

When it comes to cheese from Spain, Manchego is the most well known. This hard cheese is made from sheep's milk from a certain breed of sheep called the Manchega.

The cheese is aged for around 3 months up to 2 years.

You can easily recognize Manchego by the unique pattern on the rind. The patterned rind is a nod to the grass baskets previously used to form the cheese. The wood of the basket had that pattern on it, so it made it's mark on the cheese. Most of the time now it's done with plastic molds instead, not as romantic sounding but easier for commercial production.

Do You Eat the Rind of Manchego?

Nah, I would recommend cutting it off. Get as closes as you can with a good knife, and remove the rind. You shouldn't lose much of the cheese.

Technically the rind is probably generally considered safe to eat.

In searching around at several stores for Manchego, I was able to find 3 different ages - 3 months, 6 months, and 1 year. I bought one of each along with a Manchego from ALDI and built myself a little cheese board.

The tasting began with the 3 month. Very mild on the flavor. The most creamy of the lot.

Then moving onto the 6 month, this the age I think most Manchego ends up being. It has gained some flavor but isn't too dry at this point. The ALDI Manchego I had on that cheese board above seemed to taste similar to the 6 month.

In terms of flavor, the 1 year was naturally the strongest. At this point, the cheese has developed the crystal like texture you get when you bite into legit Parmesan. I would say it's similar to Dry Jack cheese at this point but still more mild than that. Even after a year I would still consider Manchego to be a mild cheese with a slight gamey finish at the end.

I find it to be similar to Dry Jack without being as sharp. It actually would make a fine substitute for Pecorino Romano in the classic Cacio e Pepe pasta dish.

What Is It Good For?

Manchego is great for straight up eating along with some good crackers. The more aged Manchego can be grated like you would Parmesan. Great for sprinkling on top of pasta.

If you want to get legit Manchego cheese that comes from the proper region of Spain you need to look for the DOP label. DOP stands for Denominazione di Origine. We have discussed it on this blog before when talking about Italian San Marzano tomatoes.

The cheese packaging above has DOP written on it as well as that sticker at the bottom that confirms the origin. From what I can tell, the "1/16" means your cut is coming from 1/16th of the drum of cheese. The most important thing to see is the sticker, not just the cheese saying it's DOP.

The Manchego I got came from Toledo, Spain, which is in the Castile-La Mancha region.

If you are looking to sub out Manchego in a recipe or on a cheese board, consider Asiago, Pecorino Romano or Dry Jack. Some say even Parmesan could work. Cheddar wouldn't really be the right fit as it's more moist than Manchego.

Since most stores carry Manchego in some form, a substation won't often be necessary.

What is Mahon Cheese?

We have talked a plenty about Manchego, so let's look at Spain's next famous cheese - Mahon. This cheese is made from cow's milk. It's sometimes called the cheddar of Spain, although it's definitely distinguishable from cheddar.

Mahon is named after the port town of Mao, on the island of Menorca, which in the Mediterranean - this is a well known cheese producing area.

Mahon is wrapped in cloth and rubbed with butter, paprika, and olive oil.

The cheese is considered to have reached it's maturity around 10-12 months, when it will have developed a sharper flavor but still have a buttery texture.

Differences Between Manchego and Mahon

Here are the differences between these two popular Spanish cheeses.

When it comes down to it, they are two very different cheeses. Those differences make them a great choice to pair together on a cheeseboard.

Can You Grate Them?

Even at the 3 month stage you could grate Manchego. However I don't think it's a great grating cheese for topping pasta until it reaches that 1 year point, in which then it's a grating rock star and a nice alternative to Parmesan.

Mahon cheese is softer in texture and doesn't grate well as a topping.

Can You Melt Them?

Manchego is not the world's greatest melting cheese. It has a tendency to becoming too greasy. It wouldn't be my go-to for mac & cheese unless using it mixed better melters. However I did test using it in some Instant Pot Egg Bites with great results (you will find the recipe at the end of this post).

Mahon is the better melter for sure. People love it on toast.

If you can't find Mahon and are looking for a melting cheese that is the most similar the best I can offer is gouda. Not the same but gouda could stand in if needed, if not then just for with a Manchego.

Before we end this tour of Spanish cheeses, I wanted to mention two other types that I found in a sampler pack at Trader Joe's - Iberico and Cabra Al Vino.

Looks awfully similar to Manchego however it is made from cow, goat, and sheep milk. It combines the best of each of those milks. It's a bit more tangy than Manchego and more creamy.

This cheese is made from just goat's milk, which is why it has such a brilliant white appearance. It's a milder goat cheese in the spirit of Manchego. As the name would suggest the outside of the cheese gets rubbed with wine. I didn't pick up any of those kinds of flavor really in this sampler, it was still an enjoyable cheese.

I recommend the sampler as a great way to introduce your friends to help them learn about the differences in the types of milk used.

To make these delicious Spanish Egg Bites I combined 4 eggs with 2 ounces of Manchego cheese.

To add another Spanish element, I used my favorite smoked paprika - Smoked Pienton Paprika from Burlap & Barrel. This paprika is sweet and smoky. You would think I may have put bacon or sweet peppers in these bites but all those flavors are coming from the paprika. 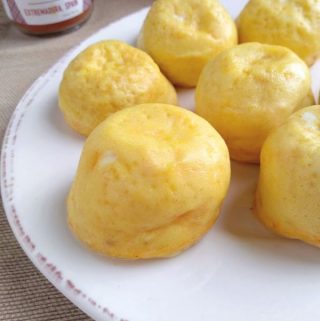 This recipe makes 7 bites, Double everything and use a second mold to make 14. You can stack the molds on top of each other in the pot.
Tried this recipe?Mention @eatlikenooneelse or tag #eatlikenooneelse

« Where to Buy Bison (Buffalo) Meat in Michigan?
What is a Juici Apple? »