When it comes to my carbonated beverages, I do not drink ones that have caffeine in them. I think it started because of something a teacher said when I was in elementary school. So because of this I don’t think too many colas. Most companies include caffeine in their colas. And while caffeine free verisons of Coke and Pepsi are readily available, I am looking for something more unique. So far I have been able to find 3 caffeine free colas that weren’t made by the big two. The first two are store brands that can be found across the country. 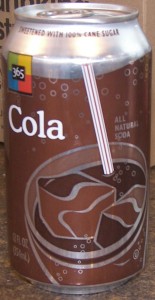 This cola is the store brand of Whole Foods. It can be found at any of their stores. You can buy them by the can for 69 cents a piece or in a six-pack ($2.79) to save some dough.

This is an all natural soda. The ingredient list is a short one: water, cane sugar, caramel color (which comes from the cane sugar), tartaric acid, natural cola nut flavor, and citric acid. It’s really nice to see the words “natural cola nut flavor” appearing in this list. A lot of drinks just list artificial and/or natural flavors.

I really like this cola. It has a good pure flavor. I think this is one of the best flavors in their 365 line (click here to read my other 365 soda reviews).

I recently discovered this flavor at my local Trader Joe’s and was excited to find no caffeine on the ingredient list. Speaking of ingredients, here they are for this cola:
Triple filtered carbonated water, cane sugar, caramel color, natural flavor, citric acid and tartaric acid.
The bottle also says that it is vegan and no gluten ingredients were used. Regarding the vintage name, that doesn’t mean that the drink contains cocaine in it, like the original Coke did.

It’s a good drink, not great, but better than Coke or Pepsi. It has a nice cola flavor with the right amount of carbonation. My wife also enjoyed it. I would buy again.

I think I was expecting something a little more spicy than I got. From drinking Reed’s Ginger Brew, which was pretty strong stuff, I was at first disappointed with the lack of a kick. But after I had another bottle, the cola grew on me. All the ingredients work well together. You can’t really taste the cloves or licorice on their own. They just add to a more complex flavor. Even the vanilla is not overpowering. The makers of this cola did a wonderful job balancing out their ingredients.