About a year ago, I discovered this ham at Costco. I have never been a fan of the boneless ham. They are usually ham that has been shaped into the un-natural shape of a log. You don't get meat into that shape with some tinkering around that is more science experiment than traditional butchery. But then this ham came along. It's not shaped. The bone is removed naturally, creating a very odd shaped ham, but one that is super easy to cut and gives you 100% edible meat. It's smoked with applewood one of my favorite smoking agents.

Costco has made some changes since I got that first ham a year ago for Christmas.

If you are interested in learning about what the ingredients that are in this ham and other hams check out my post "What's in Ham".

Now Only Half the Ham
All I have been able to find this year and this goes back to November, is a half sized ham. They don't seem to be carrying the full size ham anymore or at least now for this holiday season. I bought a 2nd one this year to make sure I had enough meat for Christmas day and to enjoy as leftovers the days beyond. One advantage to the having to cook two smaller hams is that they should cook faster as there is less mass. I will see when I cook mine this Christmas.

The Glaze is Gone
The biggest issue and I have heard about it from several of my blog readers is that the red currant glaze packet that usually comes with the ham is not gone. There were a lot of people that were a fan of that glaze. I liked it myself, minus the actual dried currants in it that I didn't care for it their whole form. Not sure why they decided not to do the glaze anymore. I have had people asking me what they make instead.

Homemade Red Currant Glaze
For Christmas this year in my household I am making my own red currant glaze. I am not going to try and perfectly match the one that is now missing. I aiming to make mine better. The glaze that use to be included had red currant juice, whole dried zante currants (which are technically dried champagne), and Worcestershire sauce. I bought some red currant jam. I am going to add some vinegar and the Worcestershire. Maybe some other spices like black pepperocrns, all spice, and/or cloves. 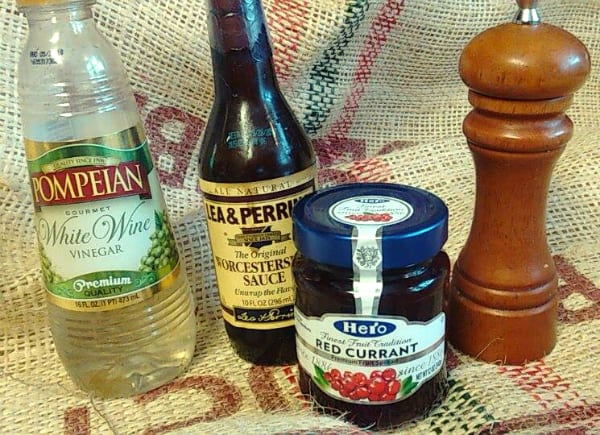 Ingredients I am considering for my own red currant glaze. This time I am going to use white wine vinegar cause I have it on hand but I think red wine vinegar might be a better choice for this recipe.

Why I using red currant is that they are tangy. Lots of ham glazes are just sweet, which is fine to go with a salty ham, but I think we can do better.

Those that want this recipe for a new glaze are going to have to wait until after Christmas. I know. I know. Your on your own on the big day. I challenge you to try your own red currant glaze for Christmas and then come back and see what I did for my family on Christmas. If you like my glaze, there is always Easter in a few months!

If you would like my new glaze recipe send right to your email inbox, sign up for my Costco specific email newsletter. It will help you get the most out of your Costco shopping experiences. Enter your email below and have a Merry Christmas.