Pumpkin flavored marshmallows are a lot easier to make at home then you think and will beat anything you find at the grocery store.

A couple weeks ago, I was in the grocery store, and I saw some bags of marshmallows claiming to be pumpkin marshmallows.

They were pumpkin shaped marshmallows, but that was the only pumpkin thing about them, they were just the same old generic store bought marshmallow.

But it got me thinking, pumpkin flavored marshmallows sound like a good idea.

It's something else I can do with all the pie pumpkins I have my disposal.

I was inspired by the blog "Taste and Tell" to make my own pumpkin marshmallows. I took the knowledge I already had from making marshmallows before and combined it with the instruction list of that blog recipe and came up with these pumpkin flavored marshmallows.

The two types of sugar - white sugar and corn syrup, help prevent sugar crystals from forming. If you have ever had grainy fudge or ice cream that has melted and re-frozen, that's the kind of grainy I am talking about. We don't want that.

The magical ingredients of marshmallow making is really the air. You need a stand mixer to pump enough air to make the marshmallows light and fluffy. A hand mixer would probably tire you out before they were done.

I have had much success with Alton's method - there are others out there. I stand by this one and it's the one I use for these pumpkin marshmallows.

How to Make Pumpkin Flavored Marshmallows

To give marshmallows that pumpkin flavor, I use fresh pumpkin puree that I made myself. No pumpkin from a can here.

The pumpkin puree is added near the end of the process. I have been working on my own flavors of marshmallows such as raspberry that didn't come out as well. I think the mistake now was adding the fruit puree too early. You need to add your flavoring, in this case pumpkin, after you have whipped some air into your sugar/gelatin mixture.

When I first tried these I was concern at first that they weren't going to set up well. But hours later, the texture was perfect. So don't worry if it seems to soft, give it time and your patience will be rewarded.

Homemade marshmallows need some type of coating on them so they don't stick together and are easier to eat. The basic coating I use is powdered sugar and corn starch. You could add some cinnamon or ginger to the coating as well for even more spicy fall flavor.

What would be even more fun is coating them in graham cracker crumbs or finely smashed up ginger snap cookies. Now we are talking! 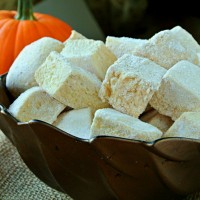 To add the flavor

Tried this recipe?Mention @eatlikenooneelse or tag #eatlikenooneelse
« When Does Orange (and Mandarin) Season Begin (and End)?
Neelys' Shredded Brussels Sprouts with Bacon »