Learn how to make Alton Brown's Chicken Dumplings including how to make it in the Instant Pot, which wasn't around when this recipe first appeared on Good Eats.

I imagine if there was a picture next to the phrase "comfort food" in a dictionary it would be chicken soup.

Chicken noodle soup is a comfort food alright. But I think when you say chicken and dumplings, you are really talking comfort.

Dumplings are like pillows floating around in a homemade broth along with shreds of chicken. That's what comfort is made of.

I first made this dish after watching Alton Brown make it on Good Eats. It was made like he said, I was evenly lucky enough to find a stewing hen - that grocery store has since closed down. Since then I have been making it with a standard chicken, but now instead an old fashion pressure cooker, I have turned to the Instant Pot.

And with a family of 6, I double the dumplings!

There aren't too many ingredients here. It's about creating a flavorful broth. We thought at first we would need veggies to go with it for more flavor but after tasting the broth, found out they weren't necessary.

The reason Alton calls for a stewing hen is because they are more flavorful. They are tough though so you need to cook them this way, you wouldn't roast a stewing hen - which is why it's called a stewing hen - it needs to stew! But you really can't find them at most grocery stores anymore, so go with whatever whole chicken you can find - air chilled would be best.

Last time I made this soup, I mixed ½ of the flour with an equal amount of semolina flour to up the flavor of the dumplings. I love the flavor of semolina, we often use it when making noodles for chicken noodle.

Let me take you step by step on how to make this in the Instant Pot, that's what most of us now use for pressure cooking. You will find instructions in the recipe notes at the bottom if you are using a standard pressure cooker.

The whole chicken is cooked at 45 minutes on high pressure. If you wanted to use a frozen chicken without thawing you could add another 15-20 minutes to the cook time.

To make removing the hot chicken much easier, I use the Instant Pot silicone sling. The whole chicken comes out at once and I can put it on a platter to cool before shredding.

This is an optional ingredient - dried rosemary. I added it last time I made the soup and it added great flavor.

Once the chicken is cool enough to handle just shred it with a fork, discard the skin and bones.

To make the dumplings, get out a sauce pan or frying pan and take some of the broth out of the pot and combine it with butter and salt, bring to a boil.

Alton likes to strain the broth through some cheese cloth to make it clear. I never found the need for the extra step but feel free to do it if you want a "cleaner broth".

Once the broth is to a boil, add all of the flour. Stir until the mixture comes together. A wooden spoon makes for the best stirring device in this situation. You shouldn't have to stir for more than 1 minute to get the dough you see in the step 6 picture. If it's still sticky, stir over low heat until it's not and a ball is formed.

Move the dough to a mixing bowl and get out a hand mixer. Use the mixer to break the dough into small pieces. Then add 1 egg at a time. The egg should be fully mixed in before you add the next. You may need to scrap down the sides of the bowl between each egg.

Add the dough to a plastic resealable bag. You will cut the corner off the bag off to use it as a piping bag. If you want to be more sustainable you can try these reusable silicone pipping bags.

Lastly I turn the Instant Pot with the broth in it back on. This time just hit the sauté button. Once the broth has come to a simmer, add in the dumplings. Cook for about 8 to 10 minutes until the dumplings are done. If the broth starts to get much above a simmer, turn off the sauté mode, and hit keep warm. I didn't find it to be much of an issue to keep at a simmer.

❓ Why This Recipe Works

The reason why this recipe works well is that by pressure cooking the chicken fast you create a flavorful broth without it becoming too oily. When I was in college I tried slow cooking a chicken for soup, the broth it produced was so oily you had to wipe your mouth between bites - it was not good!

The dumplings themselves are made like you would pate a choux, which is a pastry dough that is used to make eclairs. This process produces a light dough when cooked, so your dumplings won't be too dense. 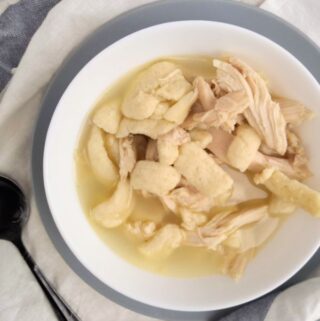 Alton Brown's recipe written in my own words to include how to make it in the Instant Pot. And I have doubled the dumplings because who doesn't want twice as many dumplings!
5 from 1 vote
Print Pin Rate
Course: Soup
Cuisine: American
Keyword: Alton Brown, Instant Pot, soup
Prep Time: 5 minutes
Cook Time: 1 hour
Total Time: 1 hour 5 minutes
Servings: 6 people
Author: Eric Samuelson

For the chicken & broth

To make the dumplings

Optional - you can take away half the all purpose flour and replace it with semolina flour How to make using a traditional pressure cooker Place the chicken and 3 teaspoons of salt in the pressure cooker. Add water to just cover the chicken without passing the maximum fill line. Cover and lock the lid. Over high heat, bring the pot to pressure. It should take about 20 minutes. Then reduce the heat to low so that pot will be barely hissing. Cook for 45 minutes. Release the pressure according to the device's manual or run under cold water for 5 minutes before attempting to open. Procced with the instructions to make the dumplings.
Tried this recipe?Mention @eatlikenooneelse or tag #eatlikenooneelse
« Grapery Limited Grapes
How to Know When Apples are Best »