Looking for an alternative to corned beef to make for St. Patrick's Day? Give this recipe for Irish style banger pork sausages and mash a try. Good any time of the year as sausage and potatoes are always great together.

Great dishes are as much about textures as they are about flavor.

I will eat something flavored with mushrooms, but give me the mushrooms themselves and I will pass them by. I don't like their texture.

Combining great flavor and complimenting textures is the key to making great food.

This is why the dish "bangers & mash" works so well. The meaty texture of the sausage, combined with the soft, creamy potatoes, and add in some lightly cooked greens you got something to really sink your teeth into.

☘️ What Is an Irish Banger?

Irish Bangers are a mild sausage made with ground pork. They are not spicy, and they tend to plumb up nicely when cooked. They normally are filled with 5% rusk.

What is rusk you ask? Rusk is a hard, dry biscuit, that is baked twice. Similar to what we would give to a young kid as a teething biscuit. The rusk is ground into crumbs and added to the sausage.

I first heard of Bangers & Mash while watching Robert Irvine on Food Network. He has brought the dish out in several shows he has been on. He is British and this is a classic British/Irish dish.

Two of my favorite places to pick up bangers is Trader Joe's and Costco.

In late February/early March Trader Joe's gets in their Irish Bangers. We have often gotten them there and they haven't let us down. They come 6 to a pack for a total of 1 pound of sausage. The cost is around $5 or less.

Costco has had a couple different brands. Lately I have been seeing Amylu Irish Stlye Bangers in Costco stores.

They are super fun. They come attached to each other. It reminds of those old cartoons, where the dog is chasing a bunch of sausages.

I did a full write up on these bangers a few years back that you can check out.

I would recommend them over the Trader Joe's ones. They are more plump and have a skin that has a more bite to it.

🍳 How to Cook Bangers

Here are my instructions for cooking bangers:

You always want to cook them in water before browning them. This helps to keep them from burning on the outside before the inside is cooked. I like doing the water first, so the outside of the sausage will be crisp in the end.

If you haven't figured it out yet, the Mash, is mashed potatoes. To make this "more Irish" can't just serve mashers on their own, need to add a little green.

You can make the actual potatoes anyway you like, for a easy and flavorful method try my No Peeling Necessary Mashed Potatoes. They are baked potatoes that get the mashed potato treatment in the end.

RELATED - How to Make Irish Colcannon

My wife, my oldest daughter, and me devoured the dish with big smiles on our faces. This was the first time I got my daughters to eat Brussels sprouts! SCORE! Hiding vegetables in mashed potatoes is a great way to introduce your kids to new veggies. They can get use to it, then later you can try to introduce them on their own

The sausage is mild enough for kids to enjoy. It's a great way to introduce them to something that isn't a hot dog.

Here are some more posts to read before St. Patrick's Day 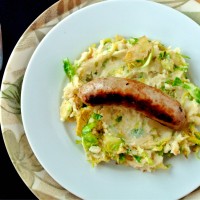