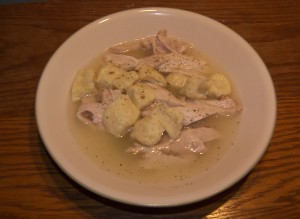 I watched Alton Brown’s episode of Good Eats entitled “Don’t Be Chicken Of Dumplings” when it first aired a couple months ago. But since it was entering summer time I wasn’t quite ready to drink down some chicken broth. But with the sore throat I have been dealing with lately, I thought the time is now. So I ran off to the supermarket to get what I needed. Here are my notes from this recipe:

1. I only have a 4 qt pressure cooker. Thus a 5 to 5 1/2 pound stewing hen isn’t going to fit. I could barely squeeze in a 4 pound roasting chicken. But it worked just fine. It still produced a flavorful meal.

2. Alton strained his broth with a colander and cheesecloth because he likes his broth clean. He said his mother would say this step isn’t necessary. I agree with his mother. I left my broth as is. I just transferred to another a wide pot for the cooking of my dumplings.

3. The dumplings were easy to make. I had no problems whatsoever. Using a gallon size bag with a corner cut out is the perfect way to dispense the dumplings into the hot broth. Also the dumplings tasted great!

4. My wife originally wanted to add carrots and celery thinking the broth would not be flavorful enough with just salt added. But with one taste of the broth, the vegetables remained in the fridge! The broth is very flavorful.

This was an excellent dish, that I look forward to using on cold winter evenings and for guests. It’s easy to make and delicious.